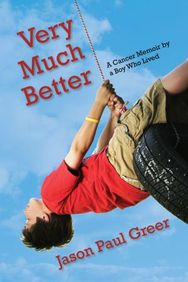 Jason was only eleven years old when a growing lump on his collar bone was diagnosed as cancer. His remarkable journey began on a day when the rest of America was going about its daily business--mothers were putting babies down for naps, uncles were washing cars, brothers were playing a pick-up basketball game. An, on that same day in Missoula, Montana, an oncologist said to a confused little boy, "Jason, you have Ewing's sarcoma." His parents held each other and wept.
At Children's Hospital in Seattle, Washington, Jason was thrust into a world of suffering beyond his imagination. But, it was in this strange and frightening new world that Jason discovered the richness of true friendship. He and the other sick children at the hospital were united by their fight against a mutual enemy--cancer. In one another, they saw heroes as well as peers. They were amazingly tough, genuinely supportive, and surprisingly practical. They offered Jason tips about what not to eat and the "correct" way to throw up--and through it all, they loved and comforted one another while the shadow of death loomed, ever-present in the foreground of their daily lives.
In Very Much Better, Jason Greer retells the powerful story of his personal journey through cancer treatment, and that of four other children whom he loved deeply and lost, leaving him the sole survivor of his band. He is the boy who lived...the one who grew up and ultimately opened himself up again and again to other sick children facing their own battle against the terrifying enemy we call cancer.
Proudly powered by Weebly